Congratulations to Jenny Miller for winning our first ever Short Story competition! To view her winning submission please see the link below.  This story cannot be used without the permission of Ms. Miller.

The Challenge: Write a short story between 2500-3500 words that is inspired by the language and story of Alice's Adventures in Wonderland

Moving and vivid plot; with an engaging, active voice

Clarity and precision in word choice

Creative connection to Alice but with an original voice

The Prize: $100 Amazon gift card and a write up in the Scroll

Some examples of language games:

‘Have you guessed the riddle yet?’ the Hatter said, turning to Alice again.

‘I haven’t the slightest idea,’ said the Hatter.

Alice sighed wearily. ‘I think you might do something better with the time,’ she said, ‘than waste it asking riddles with no answers.’

‘If you knew Time as well as I do,’ said the Hatter, ‘you wouldn’t talk about wasting it. It’s him.’

‘I don’t know what you mean,’ said Alice.

‘Of course you don’t! the Hatter said, tossing his head contemptuously. ‘I dare say you never even spoke to Time!’

‘Perhaps not,’ Alice cautiously replied: ‘but I know I have to beat time when I learn music.’

‘Ah! that accounts for it,’ said the Hatter. ‘He won’t stand beating. Now, if you only kept on good terms with him, he’d do almost anything you like with the clock.

‘Well, I’d hardly finished the first verse,’ said the Hatter, ‘when the Queen jumped up and bawled out, “He’s murdering the time! Off with his head!”’ 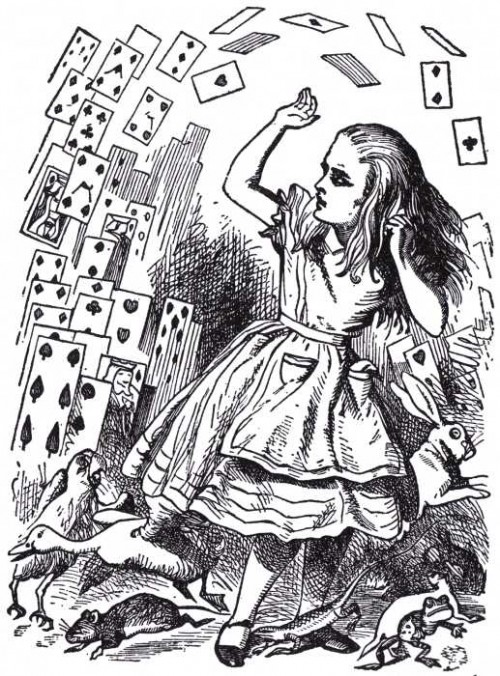 ‘And ever since that,’ the Hatter went on in a mournful tone, ‘he won’t do a thing I ask! It’s always six o’clock now.’

‘I’ve had nothing yet,’ Alice replied in an offended tone, ‘so I can’t take more.’

‘You mean you can’t take less,’ said the Hatter: ‘it’s very easy to take more than nothing.’